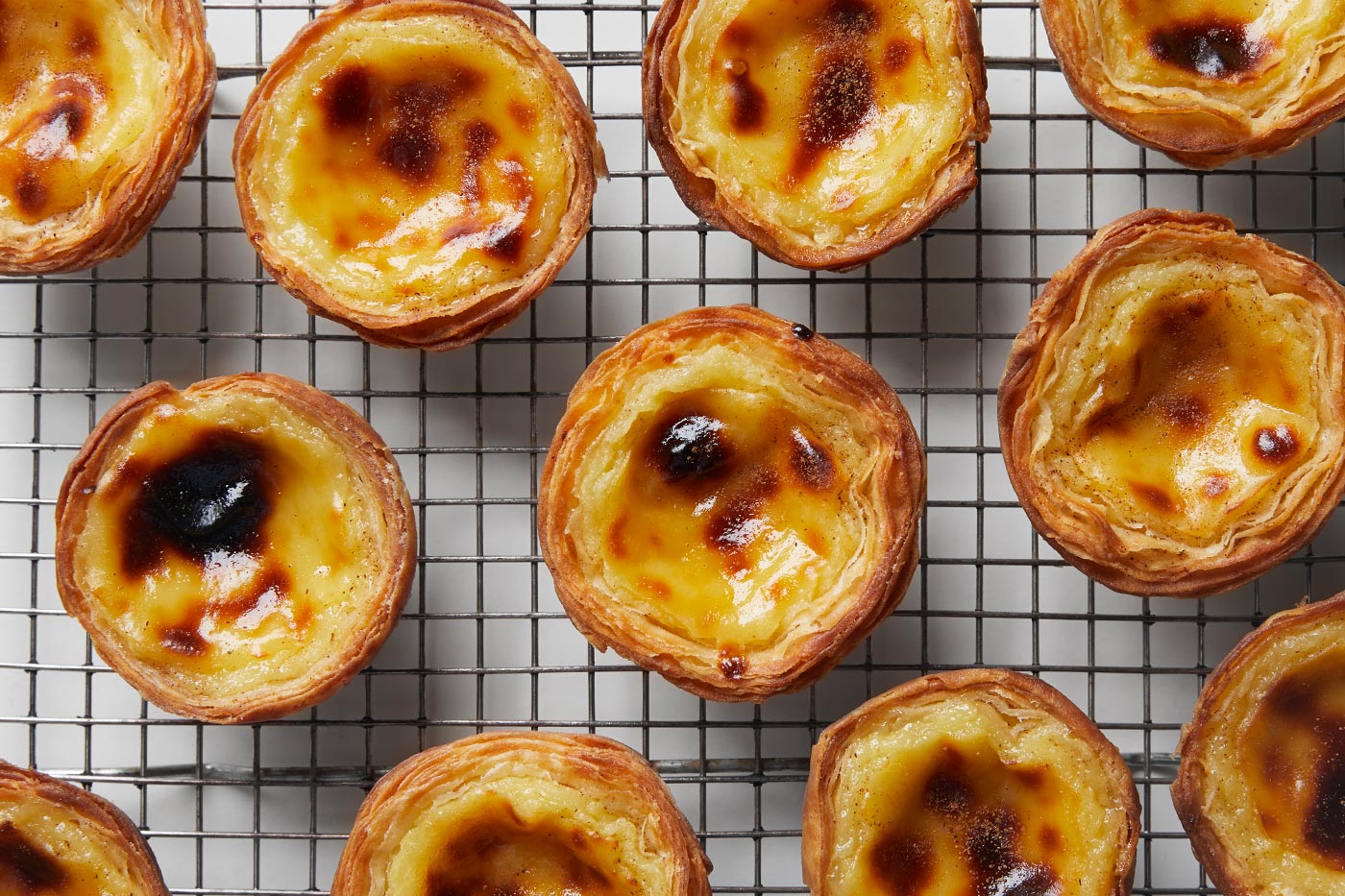 The history of egg tarts

Though the egg tarts are commonly referred to as the Chinese dan tats or the Chinese egg tarts, these irresistible delicacies have their historic roots traced back to none other than the Great Britain and Portugal! However, both the Portuguese and the English versions themselves can also be traced back to their origins from the uncrowned but undisputed king of pastries and confectionery, France, while the egg tarts that are to be found in Chinese bakeries and restaurants are slightly distinct from their European counterparts.

The English version of these egg tarts is also called custard tarts and has been around since medieval times. It is speculated that they were served during the coronation of King Henry IV in 1939, and back then, they were called Doucet’s or darioles.

The Portuguese versions of the egg tarts are called the pastéis de nata and have a funny origin story. They were allegedly first made by the monks in Jerónimos Monastery in Lisbon in the 13th century. It is said to be believed that these monks had been dwelling in France and needed to make use of the egg yolks that were being wasted because the egg whites were used up to starch the clothes in the laundry, and voila, they came up with these delicacies!

Unfortunately, the aftermath of the Liberal Revolution in 1820 drew a turbulent path for the future of these delights, and the monks of Jerónimos Monastery sensed an impending closure and first tried selling these pastéis de nata to a nearby sugar refinery, and then were compelled to shut down and sell off their recipe to the said sugar refinery. However, all is fine that ends fine; the refinery owners opened the Fábrica de Pastéis de Belém, which is still run today by the descendants of its original owners and serves these delicacies based on the original recipe!

So, the mind begs the question; How did these egg tarts make their way to China? A country not just 9000 kilometers away but on an entirely different continent? The answer’s quite simple. Just like their English and other European cousins, The Portuguese are also famous for their notorious exploratory expeditions, which first landed in the Guangzhou province in 1513, while the British colonized Hong Kong in the early 1840s.

Another historical legend says that the Chinese-styled egg tarts were incepted due to the competition between the departmental stores. Back in the day, the competition to draw customers used to be fierce. So, in order to draw in more customers, the owners of these stores came up with the clever strategy of inventing new food items weekly, and the marvel of egg tarts was also a product of these experimental inventions.

Over the course of many years, the Portuguese egg tarts expanded, evolved, and ramified into the dozens of different types and styles of egg tarts there are today, like the diamond shaped Tong Heng egg tart, for example. With hundreds of different restaurants specializing in egg tarts, it is highly debatable and difficult to crown a single one as the “best egg tart Singapore,” but here are some of the best options to choose from; Tai Cheong Egg Tart, Madeleine Egg Tart, and Chinatown Egg Tart.

Hands down, egg tarts are one of the best pastries out there. It comprises a soft, creamy center filling with an outer crunchy crust. Apart from its mouth-watering flavors and heritage, it’s also a good thing to add to your diet. Egg tart calories are good for growing adults.

Let’s talk about the ingredients involved in making these yummy snacks and increasing egg tart calories. Major ingredients are eggs, flour, milk, and butter. Let’s further break down each ingredient in detail.

Eggs are high in vitamins and minerals that are essential components of a balanced diet. They are cheap and readily available food in many regions of the world. There has been substantial discussion in the past regarding whether eggs are healthy, particularly when it comes to cholesterol. On the other hand, eggs are now thought to be healthy when consumed in moderation, as they can be a rich source of protein and other necessary elements. So, when talking about calories, we need to keep them in mind.

The second most important ingredient is butter. Butter is a dairy product made from milk and cream proteins and lipids. Most butter in the world is made from cow milk. However, butter can also be made from sheep, goats, buffalo, and yak milk. Manufacturers and home chefs make butter by separating fat globules from buttermilk by churning milk or cream.

Obesity, diabetes, and heart disease are linked to high-fat dairy products like butter. However, keep in mind that butter contains a sizable number of calories and saturated fat. For decades, scientists have disputed the health benefits of butter.

One tablespoon of butter contains 102 calories.

The egg tart recipe is quite straightforward to follow. Following are the steps needed to make the perfect pastry:

Allow butter to soften at room temperature. With an electric mixer on medium speed or a spatula, cream the butter and sugar until the mixture is smooth, fluffy, and light.

Mix in half of the whisked egg at a time at moderate speed and toss in vanilla extract thoroughly.

The shift in two batches of flour, scrub the side of the bowl with a spatula between additions and ensure that all contents are properly mixed. Knead into the dough afterward.

The dough should be rolled out to a thickness of 1/2 cm. Use a cookie cutter that is slightly smaller than the diameter of your tart tin to cut out the dough. One by one, place dough in the center of tart pans. Starting at the bottom and working up the sides, lightly push the dough with your thumbs. Turn the tart tin clockwise or anti-clockwise to achieve an even tart crust while pressing the dough. The excess dough should be removed.

Benefits and drawbacks of egg tarts

Egg tarts are rich in calories, of these, the egg calories are the same stemming from the egg yolks. which means that the more you eat, the more you’re likely to gain weight, as there is a 1:1 ratio of carbs to fats in this meal.

Calories affect how our body appears. The macronutrient intake comprises those calories that matter, and getting them skewed towards fats and carbs will hurt your diet.

It’s fairly normal to acquire the majority of your calories from fats and carbohydrates. Although it will be difficult to detect if you are getting enough protein in your diet if you do not regularly track your food, and It’s easy to forget that food has nutrition, especially when you’re eating something as delectable as an Egg Tart. However, it should be monitored and consumed in moderation because of its high-fat content.

Eating things like pastries can boost your macros, mainly fat and carbs, with too little protein. It is a good practice to balance all three macronutrients (fat, carbs, and protein). It is possible to consume Egg Tarts while also being healthy. Simply include a few protein-rich elements in your diet, such as poultry, lean meats, and fish with low-fat foods to get a proper balance.

The KFC’s Portuguese egg tarts (now just KFC egg tarts) were invented by a British chef in the 1980s in Macau and rampantly spread like wildfire across Asia by the 1990s and became one of the best sellers of KFC. Traditional egg tarts have a crumbly crust and an even yellow custard top, whereas KFC’s Portuguese creamy egg tart pastries have a smooth yellow custard top. Brown burns patches damage the caramelized surface of Portuguese egg tarts (much like crème Brulé).

The egg flavor is strong, tempered with a delicate sweetness from the caramel, and the pastry is thick but deliciously light and fluffy.

One thing to know is that KFC’s egg tarts are only sold at a few locations. So, before you rush off to the local store, double-check that the tarts are available there, and you might get lucky.

Get egg tarts with Atome!

If you are also picking up different cake stores to celebrate birthdays or anniversaries, Zee & Elle creates honest cakes and desserts that are inspired by lush botanicals and whimsical colors, handmade by a passionate team who cares. Use Atome at Zee & Elle SG to enjoy exclusive discount vouchers on Zee & Elle’s products and/or services.

Headquartered in Singapore with over 10,000 partnered merchants and available in 8 markets, Atome offers its users the choice and convenience of more flexible payment options for a variety of products and services. The app allows shoppers to split their purchases over three interest-free monthly payments by scanning a partner retailer’s in-store QR code or upon website checkout. By splitting their payments, Atome users will be able to better manage their budget while making higher quality products more affordable. Treat yourself to some egg tarts while keeping calories in mind!

How Can A Grand Wedding Not Have The Perfect Diamond Ring?

Say No to Air-pollutants with Novita Air Purifier